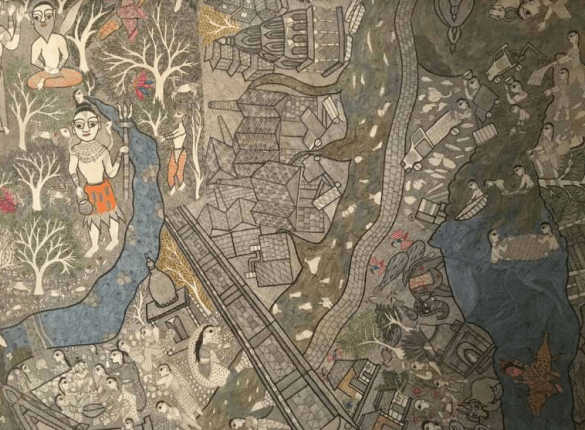 A GRAND EXHIBITION AT NATIONAL MUSEUM NOT ONLY REVERES AND ADORES GANGA – AS A RIVER AND A GODDESS – BUT ALSO LIBERATES IT FROM NARROW COMMUNAL FRAMEWORKS EXPLORING TRADITIONS, ARTS AND CULTURES OF INDIA, FINDS OUT
RASHME SEHGAL

The Nawabs in Mushidabad followed a tradition of building rafts or beras. These rafts were shaped like crocodiles, the vehicle of the Ganga, which were used to make offerings to the river. There are a number of maps on display along with film posters from Hindi cinema. There is a lovely poster of Jis Desh Mein Ganga Behti Hai and Gangaajal. Hossain quite rightly believes the river has been appropriated by Bollywood with great commercial success. The last part of the exhibition is the most poignant because there is no doubt that the Ganga is facing impending death with thousands of tonnes of pollutants and sewage being dumped into her through her long journey from Gaumukh to the Bay of Bengal. It is now up to the people of India to save this precious heritage. Whether they will is another issue completely.