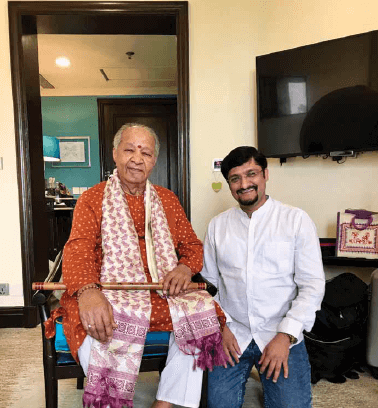 Vivek Sonar, one of the finest younger Generation flautists in the country and senior disciple of musical genius Pandit Hariprasad Chaurasia shares his journey in music, and more with N. Kalyani

Listening to a flute performance by Vivek Sonar, a long time disciple of the legendary flautist Padma Vibhushan Pandit Hariprasad Chaurasia, is a mesmerising experience. One feel transported to realms beyond the earthly. The tunes of the music outlive the performance, permeating the heart and soul verily. The music the flute produces is as charming and awe-inspiring as the art and science in the creation of the flute is beautiful and fascinating.

Based in Mumbai, Sonar is also well-known for his Flusion band and the flute symphony. Being from a small town in the interiors of Maharashtra, Sonar was well aware of the challenges young and talented musicians faced in the country. To help such talent get trained and recognised, he set up Gurukul Prathisthan, a charitable trust for dedicated learners who are staying in Gurukul and taking guidance in the traditional Gurukul System of learning music. Today, Gurukul Prathisthan’s music academy has over thousand students enrolled from India and abroad. Here, the composer flautist, who has had a two month-long concert tour in the USA and Canada this year, shares his journey in music, and more.

You were abroad for two months this year giving flute performances in the US and Canada. In general, how would you compare Indian and overseas audiences and their responses?

Music has no barrier of language because it is a heart-to-heart dialogue. In India, audiences generally appreciate immediately with a “Wah Wah!” or by applauding. Sometimes this is what happens abroad too. But more often the audience listens intently, and gives a standing ovation for long after the musician finishes performing. The ways of expressing appreciation may be different, but one thing is the same – the joy and satisfaction after listening to Indian classical music. Of course, one point I should like to mention is that I have never heard any mobile phone ringing in a concert hall during a music performance abroad! This year my concert tour began on July 30, and the last concert was on September 25. I performed jugalbandi concerts with santoor artist Madan Oak as well as solo flute recitals in Houston, Atlantic City, Fremont, Milpitas, Phoenix, Burbank, Redlands, Bakersfield, Dallas, Farmington, and Washington DC in the USA, and at Calgary in Canada. There were also a few interviews I gave to TV channels in both the USA and Canada. All concerts were well received. Appreciation, of course, does give satisfaction. It is noteworthy that in Dallas, close to 1000 tickets were sold, and that was the concert that had the largest audience amongst my concerts held in the USA. It was a jugalbandi with Madan Oak on the santoor, and it also included fusion music.

Have you also collaborated with any foreign musician/band?

In the past I collaborated with a French artist. That was before the Covid-19 pandemic lockdown. We did a fusion of French mediaeval music, which existed in the period between the 6th century and the 15th century, and Indian classical bansuri music. This form of French mediaeval music disappeared centuries ago; it did not exist between the 15th century and 20th century. A small French group referred to history books and came across these scripts and have revived it in the last few decades. And now they are promoting it globally.

You are one of the seniors most disciples of Pandit Hariprasad Chaurasia. You have had a long association with your guru. Please share with us the one outstanding quality you find in Panditji – as a musician, as a guru, and as a person.

Yes, I have been training with guruji since 1997; it is 25 years now. With regard to his being a musician, I can describe him simply thus: Guruji is “God of Flute”. He is synonymous with the bansuri. He has given an identity to the Indian flute as bansuri to the world. As a guru he has created generations of those who play the flute, and, therefore, lovers of the music of the flute. He teaches us, his students, open-heartedly. I am from a small village named Chalisgaon in Jalgaon district of northern Maharashtra, but I got the opportunity to train with him. He treats me and loves me like his son. He is literally my guru, my father, my guide and my god. As a person he is a legend, but is so humble, loving, caring and polite. He is a great human being; I have never seen such an amazing human being.

Tell us something about your concept of Flusion.

Flusion is my fusion band. It brings together the best-in-class artists of today in a musical ensemble. It is a league of international artists who celebrate their art with great aplomb.

You are a pioneer of the flute symphony. Please tell us about it.

The flute symphony is a novel concept that features more than 100 flautists who perform together on stage. It is a treat for the eyes, ears and soul. It is a unique and copyrighted concept that was created by me in the year 2007, and ever since it has been setting new benchmarks and giving an incredible experience to music lovers. The symphony is similar to a humongous hundred-piece orchestra. It consists of a group of artists on flute in the centre, accompanied by other artists on instruments like the saxophone, guitar, harmonica, keyboard, and drums, besides others. Every year the symphony features a special Indian classical raga-based composition in a format of Western harmony. It has been an endeavour to create each piece notably different from the earlier one – classic yet new, refreshing yet nostalgic. It includes film songs, fusion, and folk numbers.

Your beginnings in the field of music – when did it all start?

Your father had spiritual leanings too, belonging to the varkari sampradaya, a spiritual tradition that includes devotional music and poetry. Yes, my father, the late Ramchandra Sonar,was a vocalist in the varkari sampradaya, which is a Vaishnava religious sect in Maharashtra having 700 years old tradition of spiritual music, and therefore, it was natural to listen to bhakti sangeet (devotional music) at home. He was a vocalist in the bhajan-kirtan genre. I started playing film songs on my own when I was in fifth grade. Since my childhood I was in love with the bansuri. My parents encouraged me to learn the bansuri. My father took me to my first guru, Purushottam Antapurkar, when I was studying in the ninth or tenth grade. Subsequently, with all the support that I got, I reached Pandit Hariprasad Chaurasia to learn to play the flute from him. For me the bansuri is really a lovable instrument.

You also run the myGurukul app to teach music. Tell us about it.

I used to live in Chalisgaon and used to travel to Mumbai to learn to play the flute from guruji. The return journey from Chalisgaon to Mumbai is approximately 14 hours, and I used to undertake this trip. I was fortunate that I got the chance to learn from the maestro. Now my point was: What about those who do not get the opportunity to learn music from the maestro? In the 25 years that I have been a disciple of my guru, I have learnt many important things. I believe everyone should have the right to learn authentic Indian classical music. As I am techno savvy, I collaborated my learnings with technology, and I created the my Gurukul app, which was launched by my guru on January 26, 2017. The myGurukul app is the world’s first Indian classical instrumental music learning app. To date, more than 3 lakh people in 65-plus countries are getting the benefit of learning the Hindustani flute, Carnatic flute, tabla, violin, and sitar from the myGurukul app.