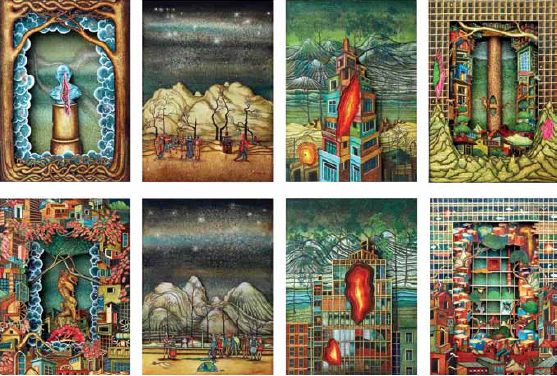 Urbanisation and cityscapes interest Digbijayee Khatua, who likes to facilitate a dialogue with the urban features of fragile relationships and the awkwardness of coexistence
Text: Team Art Soul Life

As Marco Polo entertains the Great Khan in Invisible Cities: “Cities are like dreams, are made of desires and fears, even if the thread of their discourse is a secret, their rules are absurd, their perspectives deceitful and everything conceals something else.” (Calvino 1972, p 44). Our built environment contains meaning, in the course of human history; our fears and desires, our dreams and nightmares have all been given urban form. It is not only architects and city planners, who help shape a city, but also those creative minds with ideas and visions for what a city should be like and how it should function. Delhibased artist Digbijayee Khatua is one such talented soul for whom every aspect of it – from a city’s landscape and architecture, to its infrastructure and sewage system, to its people and their activities- is a muse. If it was left to Khatua, whose practice is vastly influenced and marked by his shift from Odisha to Delhi and personal encounter with the ever-changing cityscape, evident in his recording of minute details, both real and imagined, designing cities will always be more of an art than science. Khatua says he has always been interested in urbanisation and cityscapes as a subject matter. “I came to Delhi in 2012 for my Master’s from Delhi College of Art and would go around wide-eyed exploring and absorbing the art scene here.,” he says. “I believe I stayed back not only for the exposure, but also for the intriguing challenges this city throws up every now and then. This fascination allows me to paint real and imaginary details of the ever-changing cityscape.”

Subjects such as time, isolation, and transition stir him and he likes to facilitate a dialogue with them long with the urban features of fragile relationships, and the awkwardness of coexistence. “To that end, I reate miniature-like details in the narrative paintings,” says Khatua, who fuses the stylistic elements of iniature paintings and traditional Patta paintings in a contemporary context. “My latest series of paintings traces a trajectory in a diorama of a fictitious rural land, gradually developing into farmland and then into a town. Beginning with a square of Styrofoam, I carved mountains, valleys, rivers and ponds, and propagated a verdant landscape with wire and foam trees.” Khatua, whose artistic oeuvre is primarily inspired by the traditional Patta paintings of Odisha, says his recent works see some experimentation with a meticulous rendition of the wash technique on multiple layers of paper which gives the works a pronounced effect of relief. “This implies a metaphor of the layered realities in the city life,” he explains. “Watercolours are an important part of my expression, which enables me to juxtapose translucency and depth in the paintings. The process can take months to realise once the basic idea and concept is in place.”

“I stayed back in Delhi not only for the exposure, but also for the intriguing challenges this city throws up every now and then. This fascination allows me to paint real and imaginary details of the everchanging cityscape.”

From painting uncanny semblances of landscapes and the still life around him in Orissa, to following a ore conceptually strong practice in Delhi, he sees a maturity seep in his works and his sensibility as an artist. He says: “Living in the cultural capital comes with challenges of its own and in stark contrast with my hometown, the city is constantly affected by unnatural elements of pollution, corruption, etc., while on the face of it, everyone is quite taken in by its (artificial) magnificence.” Khatua says his rural background, an appeal of the urban lifestyle and the metropolitan has instigated in him the desire to see the city architecture, its view, history, design, culture, and the mundane day to day life. “I’m mostly influenced by the complex systems for sanitation, utilities, land usage, housing, and transportation. A big city or metropolis usually has associated suburbs and exurbs and the interwoven relationship and juxtaposition of differences overlapping one another to form a throbbing metropolitan life that fascinates me,” he says.

Ask him how he first began to develop his unique style and he says, “I have been observing how the city life grows with a departure from natural elements and everyone feels lively with man-made beauty which comes with its complications. The visuals in my works gain various perspectives and layers while rowsing through compartmentalised renditions of the city.” Explaining the process, Khatua says he explores a iversity of details in naturalist, man-made objects. “The subject is articulated in abstract and stylised forms to embellish the surface of the paper as threedimensional spaces with metal work, papermaking, watercolour and found objects,” informs the artist, who besides watercolours, has broadly worked with burnt paper, matchstick wood, and found objects as a medium. “These works deal with objects and landscapes within the city, and I often include small detailed drawings which elevate the work from being just one of many elements within a landscape. Over time, the structure of buildings become more isolated. I can trace the movement from drawing to painting to paper-cutting and forming layers to make for a three-dimensional form.”