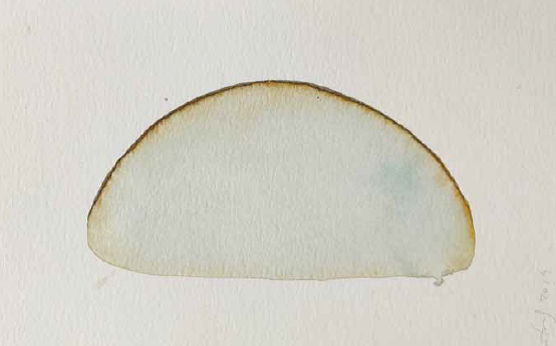 Colour and form are the essential content of Gayatri Gamuz’s work and through stillness, she understands oneness, the ultimate reality which manifests itself in all things, and inside this process she paints

For Gayatri Gamuz, being nothing is everything. Her art is the reflection of the simplicity that rests in everything – of the heart inside, of the intangible. “The viewer sees the painting and relates with the inner world inside the emptiness of the mind,” explains the artist, who was born in Spain, but has lived in South India for most of her adult life. She says the significant aspect of her work is the work in itself. Gamuz says through stillness, she understands oneness, and inside this process she paints. “The ancient traditions constantly refer to this oneness, the ultimate, indivisible reality which manifests itself in all things,” she says. Colour and form are the essential content of her work and her inspiration stays in between the east and the west, between the oriental abstraction inspired by the Zen calligraphy and the contemporary western abstraction. “Silence and stillness are not a conceptual knowledge, but our essential nature, the nature of the “I am” that is deeper than name and form,” she says.

Living at a farm in Thiruvannamalai with her Malayali husband and two sons, Gamuz says the change has definitely affected her work style. “Certainly, life close to nature brings the individual to experience life in a broader sense. As we live close to animals, insects, plants and trees, our mind moves naturally from the anthropocentric, neurotic mind to a deeper connectedness with all,” she reasons. “As nature around us unfolds to reveal its complexity, we realise every day that we inhabit a densely connected ecological universe where nothing is isolated, where there is no separation, where nothing is accidental. My work is founded primarily inside this understanding.” She says for many years her art was very intimately connected with contemporary realism. She believed that realistic expression was the only way she could relate with the world of art. “I was not only painting figurative, but also attending figurative residencies, workshops and exhibitions, buying books, researching documentation on figurative artists,” she reveals. “I was convinced that all the poetic, transcendent expressions of the soul could be fully contained inside the figurative form. Then a few years back, as I was turning 50, in the high revolutionary turmoil of my enlightening, marvellous menopause, I went through a period when I could not work, weeks and months passed and I could not paint.” Gamuz says she felt an urgent need of emptiness and silence. “It came as a call to move somewhere else, to understand myself and my work from another space, from the space where words were not needed, nor characters, genders, animals, things, objects,” she says, adding, “I felt as if I needed to get liberated from some conditioning. I needed to flow without language, to get in the infinite space of colour beyond the boundaries of concepts. The studio became a space of reflection. Then came the answer… the answer was change, move somewhere else, keep everything aside and start again, from the beginning, from this silence,from this nothingness. I made my first abstract painting and since then the silence remains.”

Ask Gamuz about her earliest memories of art and she says Spain is a country with a big tradition of artists, especially oil painters. “In every small town and remote village, you will find professional artists who exhibit locally as well as people who simply paint as a hobby,” she informs. “My father was a bank manager and back then in Spain, bankers were targeted as possible art buyers, so he was often invited to exhibitions. As a result, over the years, the walls in my family house filled up with all kinds of artwork from local artists.” Gamuz remembers how exciting it was to reorganise artwork to make room for a new painting her father would bring home, or rearranging the whole collection whenever the family changed houses (which was frequently as her father’s job required changing locations). “This close relationship and engagement with paintings from a very young age definitely influenced my attraction to art,” she says. As for deciding to become an artist, she recalls how she was a tireless, creative child. “I was always

doing something with my hands. I made many dresses for my dolls, sculpted figurines with clay, which I cooked in my mother’s oven. To her disgust, it really was quite messy. And I learned and loved to crochet with my grandmother,” she says. “I was very fond of colour and had a strong attraction to all art forms. I observed and related with the world from an artistic angle. I was a dreamer. I recall when the circus came to my town, my strong urge was to join them, to travel, to see the world, to be free. I told my parents and of course they were unhappy.” As a teenager, she thought life was meaningful only if she was involved in changing the world into a better place. So, she decided to study social work and continued to make sculptures in her shared student apartment and often went to the theatre and exhibitions in Alicante, where she was attending university. “In the third year of my studies, I went to see a contemporary play in the city. The venue was in the open air, next to an old castle on a small hill. While seeing the performance, with the immense black sky on us and the orange illuminated stage, I experienced a deep revelation and suddenly at that moment struck me the thought to start a new path, to move from being a passive spectator to an active creator. Soon after that, much to the surprise of all my friends and family I left social work and began to study art,” she recalls.

Talking about the various mediums, Gamuz says she works with oil on canvas as well as a wide variety of mediums on paper like pencil, colour pencil, ink and watercolour. “Each medium has its own intrinsic quality and character,” she says. “The oil paint is solidity and power, a very present material. It demands a solid execution; you cannot paint with oils if you don’t feel a hundred percent full power. But you could do

a small drawing even if you are not feeling well.” She says the viewer needs to see the oil painting with the same strength; the canvas is like a big object on the way which cannot be ignored. “It is a very solid medium, and that is one reason why it is so fascinating for me to express immateriality and transcendence in a big oil painting. The watercolour is the other side of the oil painting. It relates with the fluidity of water; it is like a river flowing. Watercolour contains naturally all the necessary qualities for transcendental expression, to express lightness, emptiness, and the space beyond the material,” she explains. Gamuz says size also determines the character of a work. “Hold a small watercolour in your hands, look at it for a few seconds and you feel as if you are breathing the painting, as if the painting enters inside you. With a big oil, it’s the other way… you stand in front of the painting and look at it for a few seconds and it feels as if the painting takes you in, embraces you, swallows you.” Gamuz says she needs the gentleness, lightness and softness of the watercolour and also the unique strength and power of the oil. “I love the small paper and the big canvas, the puddle after the rain and the big ocean, the pebble on the path and the big mountain on the horizon,” she adds.