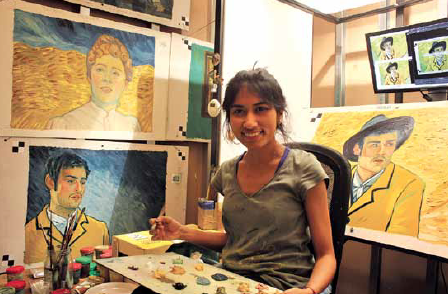 A painter, illustrator and animator, who has worked and travelled across Europe, US and Israel to study and collaborate on various projects, Hemali Vadalia wants to apply her classical realism knowledge to Indian aesthetic and create personal works

There has been a quiet return to an older way of painting. To standards from the past. To a time when drawing mattered. When shock value wasn’t so highly regarded. A time when art and craftsmanship were one and the same. A multi-disciplinary artist currently living in New York, Mumbai-born Hemali Vadalia is one such realist painter whose work explores the ideas of freedom, self-image, and belonging in the everyday lives of people. Her medium of choice is primarily oil on linen and she has worked and travelled across Europe, US and Israel, to study and collaborate on various projects, pursuing her passion for art. A skilled animator (both Claymation and stop-motion), illustrator, and sculptor; she’s also created stunning works of sand art, paper art, and clay art.

Her claim to art fame, however, has to be being part of Loving Vincent—the first painted feature film—that delves into the life of Vincent van Gogh, which was nominated for Oscars in 2018. Working as a part of the team of artists, who spent hour after hour, day after day, sitting and painting, was Vadalia who spent seven months, between May and November 2016, at the studio in Poland, where she painted a total of 358 frames for seven of the film’s scenes. This involved painting approximately four frames a day, each of which would take her two to three hours. But it was long before she actually put brush to canvas in the studio in Gdansk, Poland, that she first heard of the film and wanted to be a part of it. “After I saw the trailer in 2012, I wrote to the director, asking if they needed artists to work on the film, but I never heard back.” It was only in 2016, after the engineer-turned-animator had already spent time studying at the Angel Academy of Art and the Russian Academy of Art in Florence, plus a semester at the Grand Central Atelier in New York, did she revisit the possibility of working on the movie. She applied again, went to Gdansk for a rigorous three-day test on painting and animation, followed by a training programme, after which she began working on the film. But though working on the film and painting all day long, every day, was an intense, time-consuming, and often exhausting process, it was something that all the artists involved in the project enjoyed immensely. “It was a one-of-a-kind experience, and it was nice to ‘live’ this process. And making a painting move is just another experience,” Vadalia remarks. When they saw the rough cut of the film with the scenes, they had painted in it, it was overwhelming. “It was emotional for everyone,” Vadalia smiles. Ask her about her creative background and how did she get here, she says, “I have always loved to make things. However, growing up in a well-educated traditional Indian family, I never thought I would take art up professionally. I studied Computer Engineering from Mumbai University and while working as a software programmer, I used to make caricatures for my friends and family. At some point I realised that I would be much happier if I spent more time making art. I completed my Masters in Animation and Film design at IDC, IIT Bombay, which was my introduction to the creative field.”

Vedalia, who studied classic realist art at Grand Central Atelier, New York, says she has always liked working with tangible mediums. “While working on my two short films, I did a lot of paper craft and clay art to create characters and visuals for the films. This gave me a good start when I began freelancing. People admired handmade work and commissioned me for the illustration and animations for projects ranging from brand campaigns, game designs, children’s books, magazines,” she informs. Vedalia says she was always interested in visual art but it took her some time to get to it. “When I attended one art exhibition back in 2009 on life events of Gautama Buddha, the works were so soulful, I felt I wanted to be skilled enough to be able to create something so moving, so beautiful,” she says, adding, “Later I decided to study Animation and Film Design, where we were introduced to the art of visual storytelling. We studied the works of contemporary artists as well as classics. I began working with different mediums to create images to tell my stories well. I learned about artists whose work and life inspired me, I found out their inspirations and what influenced their work. I was introduced to the works of old masters then.” She says she has learnt to accept the uncertainty that comes with shifting careers. “One needs to be okay with not having a clear vision when taking the first step. If you are sincere and have patience, the vision will evolve over time. There is joy in the pursuit of anything. The initial transitional excitement, hardships and arriving brings a sense of wonder to life. It is a journey. Sometimes I need to slow down a bit in the process,” she avers. “Also, I know that becoming too comfortable wouldn’t help me grow. I keep discovering other masters’ works, which inspire me to become a better artist. After working on many paper craft and clay art projects, I feel very comfortable and confident when I have to illustrate or animate in these mediums,” she adds. With such a diverse portfolio now, are there certain influences, or goals that bridge these projects together? “Observe, study, and practice. This goes for everything, whether it is a drawing, painting or making illustration in paper craft or clay art or animation,” she says. “It always helps to learn from nature and apply the knowledge in the work. I have been curious to try different mediums to convey messages in a way that is meaningful and fun to look at. Sometimes I make art to remember a special visit somewhere or the travel itself. When I look at it, it reminds me of the people I met and that life is good.” Talking of her artistic mission, Vedalia says she wants to paint large figurative works in landscapes. “There is still a lot I need to study in terms of storytelling, composition, and achieving technical skills. I think it takes patience and time. Currently, my intention is to apply my classical art knowledge to Indian aesthetic and create personal works,” she says. Vedalia says she enjoys working with people from big production houses to collaborating with other artists and individuals on a personal level. Besides working on Loving Vincent, her plasticine artworks were selected for an international art show ‘Plasticine Art’ at Old Jaffa Museum in Tel Aviv, Israel in April 2017. “It gave me a reason to travel there, opening up more artistic collaborations and developing bonds with the Israeli artists and musicians I met,” she informs. Ask her about her biggest creative influences and she says the influences have changed over time; however, she has always been inspired by a strong sense of craftsmanship and involvement towards the work. “I am really inspired and influenced by the works of Ilya Repin, Serov, Ivan Kramskoi, Sorolla, Andrew Wyeth, Sargent, Walter Langley, Camille Claudel, Rodin, Jules Bastien Lepage, Pascal Dagnan-Bouveret, and Gustav Klimt. I love animation shorts also; in a short time, they sometimes give a very strong message. Animations by Caroline Leaf and Lotte Reiniger are delightful,” she says