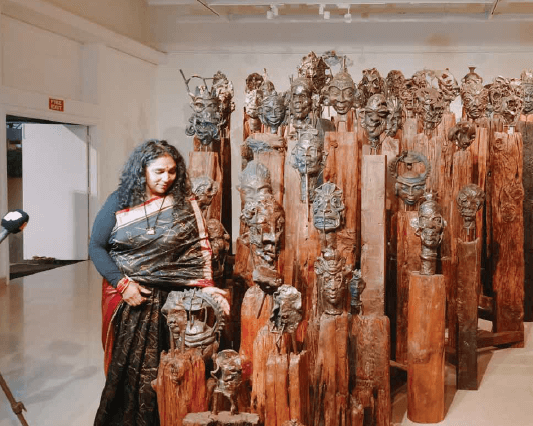 Nivedita Mishra veers away from creating works within the format of an average sized figurine and takes bold strides into the arena of mammoth sculptors with the ease and artistry of a confident creator, says Subhra Mazumdar

Sculptor Nivedita Mishra, does not sculpt her works according to the conventional norms of her art form. What this entails is that this artist veers away from creating works within the format of an average sized figurine and takes bold strides into the arena of mammoth sculptors with the ease and artistry of a confident creator. Spending an evening with this creator one realises that forms, in sizes ranging upto nine feet and eleven feet are the average output from these five feet and more, sized creator, for whom the ‘bones’ of her structure are developed around strength and simplicity using the least malleable of materials: hard granite stone, which she chisels, using just her muscle power and a hand-held drill.

As for her subjects of depiction, there is nothing derivative or even down-to-earth in them. These works draw the viewer’s imagination into the very primal source of human thought, namely the wellspring of Shiva’s spiritual energy that was presented to mankind in the form of Devi or Durga. Hence the latest series of works from the Nivedita Mishra studio are based on the depictions of numerous Shakti Sthala associations, which are today worshipped as spaces that had received the bodily parts of the goddess when she was being carried round the universe.

Thus, in her works, the sources for her subjects are the essential divine parts that have inspired the shapes and textures of her art. Her giant-sized anatomical output ceases to be a mere exaggeration of the human anatomy and becomes elements of form and rhythm that somehow weave themselves into a spiritual way of creating rhythm and delicacy in her hands. The seemingly rough surface of the stone, which the sculptor deliberately leaves untouched, evokes the minimum of human interference for purposes of ornamentation, or anatomical reasons and thus concentrates the viewers’ attention on the innate philosophy that she has expressed through her sensitised and essential treatment of her material of choice. The leitmotif of her art is not an attempt to make the stone a feature for recognition of the body parts of the goddess, but a powerful form that is unmistakably a depiction of the Shakti peetha objects that tradition states fell on sacred spots of the land of Bharat and has now become the cornerstone of homogeneity in the philosophic acceptance of profound truths. And this is not all, for this artist’s primal source of creation is the idea of ‘Nari Shakti, not through its commonest emblematic choices as in the form of Durga, but as the 64 Yoginis. Thereby, she bridges the human and the divine in its most popular universal conceptualisation in the sphere of art, namely the feminine form. Having lived for over 15-17 years in western Odisha, an essentially tribal friendly part of the state where Tantric knowledge has acquired widespread scholarship, Nivedita has experienced the in depth understanding of yogini ideations through her lived opportunities. In her milieu the yoginis were flesh and blood individuals who visited and It was therefore a foregone fallout that in her latest exhibition, which had come into fruition after a preparatory stage of 17 years, this unique concept should find expression in the most exploratory journey visible. Using her sculptural expertise, this time in metal, the artist infused life into malleable metal through her creation of 64 Yoginis, a bronze conglomerate of individual torsos with each facial expression transcending beyond aestheticism and intellectualism into the realm of the super spiritual that critics have adjudged as canonical outputs of religio-mythical iconography. What viewers were gripped by was the variety of facial expressions of all the 64 sculpted personae. interacted with the local folk around.

Even their ornamentation and their anatomies, such as the shape of the nose, are deliberately underlining the statement that humanity is interlinked and yet each of us is an individual identity as well. An artist who is also an out-of-the-box exhibitor of outdoor artworks, Nivedita makes use of borrowed space to advantage by placing her specimen references of figural contours delightfully juxtaposed into garden settings. In other works, Nivedita uses the exterior façade of the cemented gallery building and the floors and walls of studio space as areas to exhibit the dimensionality of her sculptures. In the bargain, these works acquired another form of artistic dialogue, comprising eye-catching attractions both within and outside the exhibition precincts of the Shridharani Gallery. It was the placement of this conglomerate of 64 yoginis that made the focal energy.

While the outdoor area was occupied with references to the expose of the Shiva cult in the form of human sacrifice references, the semblance of a cremation ground, having the tell tale samples of such destinations, the explicit end of this conceptualisation was achieved by placing of the model of a gallows contraption, alongside. On the other hand, the interior space was contrastingly serene and yet equally soul jerking in its effect. It was the placement of a conglomerate of 64 yoginis that spelt out the Indian spiritual wellspring of focal energy. Around the amalgamation of the 64 yogini torsos was a binding force of femininity depicted through a floor spread of powdered haldi sourced from the natural grown product from her area, where the cult of Yogini practices is a living practice. Thus the aroma of freshly ground spice wafted the senses into imagining a setting where the yogini per se, was not an extraneous concept, but one that was interlinked in the persona of every woman who exudes a bedrock of inner strength, which needs no frivolous outward signs to make its presence palpable to one and all. Incidentally, the familiar pungency of the spice not only freshened the air indoors, but when the light fell on the features of her sculpted shapes, the shadows of these statuesque forms fell obliquely on the yellow mass making their appeal a duality born of aromatic vibrancy like none other.

Even the wooden platform on which the whole composition was mounted had an old world and reclaimed air, as it was constructed from salvaged railway sleepers. The wood was bereft of any cosmetic touches adding another dimension of otherworldliness to the environs. Then as the visitors arrived at the opening of the show, they were induced into the appropriate frame of mind with chantings from the slokas sung by a duo of special pandits who graced the occasion, coming all the way for this special inauguration from Varanasi. Today, while the exhibition doors have long been drawn at the gallery, the specimen creations have been given a new lease of life in a garden setting, where the silver grey of the granite is a repository of the wisdom of the ages, and the greenery sprouting beneath one’s feet becomes the image of new life absorbing the ancient wisdom passively and graciously.

While this is just a temporary halting ground before the works are shifted into their designated exhibition areas as outdoor sculptures, Nivedita is busy in her studio, which too, is a covered area roofed with eco-friendly bamboo where the artist and her muse can be seen chiselling, rubbing, etching and shaping yet another form, based on the wisdom of mankind and brought into focus through her massive or diminutive shapes preparation for the next exhibition, in another venue and at another time. 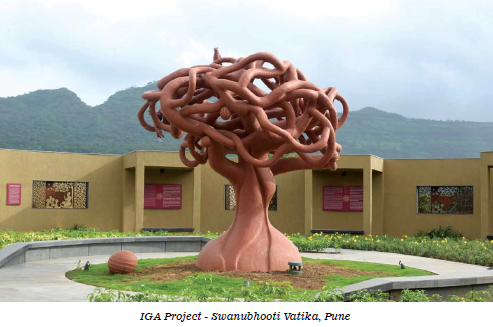 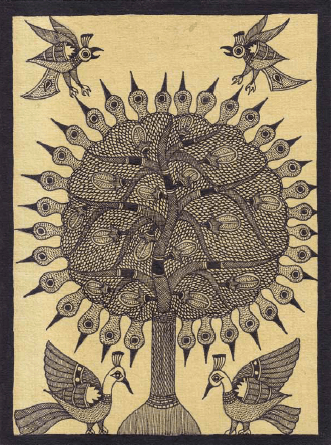