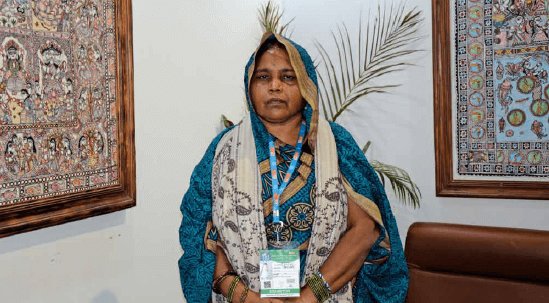 Belonging to the marginalised Mallah community, Padma Shri Dulari Devi’s life struggles are hard to imagine by looking at the intricate Madhubani patterns and designs drawn by her using a myriad of hues
TEXT: TEAM ART SOUL LIFE

A beaming face and colourful saree worn the traditional way. She can easily be mistaken for a housewife from the backyards of Bihar but this is the recent Padma Shri award winning Madhubani artist Dulari Devi, who is doing a live demonstration of her art at the Hunar Haat organised by the Ministry of Minority Affairs. One can guess her popularity by the fact that every visitor wants to be clicked with her and she is humble enough to pose and oblige. This is the recognition of the Mithila artist and the art being acknowledged by all and sundry.

The 50-something Dulari Devi is from the well-known Raanti village in northern Bihar, the seatm of Madhubani art. In fact, Dulari Devi is not the only artist from Raanti, who has been awarded with Padma Shri. Two other artists, 93-year-old Godawari Dutta had received the honour two years back in 2019 while Mahasundari Devi was awarded the Padma Shri in 2011. The latter died in 2013 at the age of 91.

Back to Dulari Devi, someone who started out as a single dalit woman working as menial labourer secretly nurtured the dream of becoming an artist. The ambition took wings ever since she landed with a job at Mahasundari Devi. Married at the age of 13, Dulari left her husband’s home for good when her six-month old daughter also died. She came back to her mother. Her close association with other big artists like Karpoori Devi paved her path to name and fame.

“I would get six rupees per month. We were four sisters and one brother. To run the family, I would do various odd jobs, sometimes in the farm and at times in other houses in the village,” Dulari Devi recalls the ordeal that was an integral part of her life. Later, she went to work with Karpoori Devi, another reputed Mithila artist. “I worked there for 25 years. I would call Karpoori Devi, chachi-dai (aunty mother). She was always very supportive and really did not demean or differentiate between upper and lower caste,” Dulari Devi recounts. Today the artist has scaled a height few can imagine.

But Dulari Devi actually embarked on the journey into the art world when there was a month-long training programme at Mahasundari Devi’s house. Dulari was quick to grasp the opportunity and joined for formal training. “Back home I would take a dry twig and practice drawing on the kaccha floor, only to be rebuked by my mother. She was superstitious about scribbling on the floor. She would scold me that we would turn into beggars if I drew on the floor.” 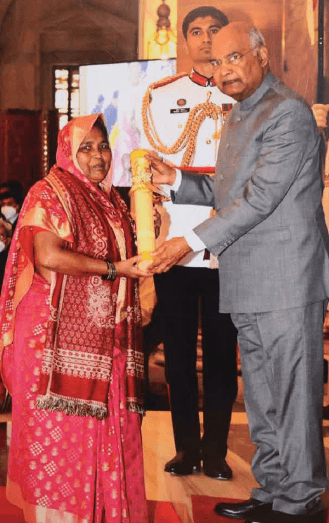 Although traditionally painted on the walls of homes to mark festivals and other important occasions, Madhubani art has since moved to paper, cloth, canvas and other surfaces. “One day Gauri Mishra of Seva Mithila handed me a piece of silk to work on. Silk is slippery, so I was very scared that I would mess up everything. Then, she gave me cotton cloth to paint. After I was successful in drawing on the handkerchief sized cotton cloth, I was given a saree to paint. And believe me it came out beautiful,” chuckles Dulari Devi. The style originated in northern Bihar and the neighbouring part of Nepal, which falls in the Mithila region, known as the birthplace of Sita. This form of art draws inspiration from the Ramayana, nature, and folklore. Dulari Devi picks up subjects as varied as Ramayan, Kamala puja by her community of Mallahs, Gamaia Puja, Covid pandemic, Beti Bachao and of course, Modi ji. “The sikki ka doli theme I made is housed in Bihar Museum in Patna,” she announces proudly.

A full-time artist now, Dulari Devi gets up at four in the morning and works till she feels drowsy. “If I get up at night and don’t feel sleepy, I pick up my brush. Several times, I sing while I paint. The songs are related to the paintings and are all folk songs. So, when I was here in Delhi to receive Padma, I was extremely happy and excited so I couldn’t sleep. And I did what I always do to calm myself… I just got up and painted day and night,” she reveals.

Proficient in both Kachni and Bharni forms of Mithila art, Dulari Devi enjoys the Bharni form more because of the bright colours. While Kachni involves sketching, Bharni is used to fill the sketches with colours. “I sketch quickly but design and colour are time consuming,” says the artist. “I love mornings and the bright colours that come with it,” an exuberant, optimistic outlook from a woman whose early life was filled with tragedy and desolation. Even when the country was reeling under the impact of Covid-19, Dulari Devi would go to Kharak Kothia, Petia and Pat Ghat to teach Madhubani art in schools. She is happy that children of Saurath area appear for exams to learn Madhubani art.

Last but not the least, she acknowledges hard work and patience are the key elements for an artist to be

successful and in the same breath, Dulari Devi adds, art and tradition need to be saved and nurtured. She shares her humble beginning, “For a long time, Hashigawa from Japan would give me five rupees for 60 pieces, but we enjoyed working.” Today she has matured into one of the top Madhubani artists and takes orders of not only contemporary and traditional folk themes, kohbar designs but Dashavatar or the ten incarnations of Lord Vishnu remains her favourite theme.

Dulari Devi seems to be a happy person with whatever she receives in life. However, one remorse she cannot forget is not having a photo with former president Abdul Kalam. A snapshot with Modi ji at Rashtrapati Bhavan has, however, lessened her pain. Looking forever ahead, an optimistic Dulari Devi has plans to travel to Thailand and take Madhubani art to newer heights.