Conceptual artist Atul Bhalla on a one-of-its-kind art initiative to map the history of weather from locations around the world through the imaginary line of 28N Parallel
TEXT: TEAM ART SOUL LIFE

New Delhi-based conceptual and performance artist Atul Bhalla is passionate about water. He has spent more than two decades addressing the physical, historical, political and religious aspects of water using photography, video and installation. He engages with the eco-politics of water as well as exploring histories and associative meanings of sites of everyday living, often building narratives through performance. Now the Professor and Head, Department of Art & Performing Arts, Shiv Nadar University, is undertaking an initiative titled ‘False Clouds and Real Deluges’, to collect photographs, videos and sound footage of weather’s history from locations along the 28N Parallel to compile a one-of-its-kind art initiative. “The world’s weather is not what it was. We all have an intimate relationship with weather. It shapes our everyday experience, and we have found words to talk about it – stormy, calm, heavy, icy – that describes climatic conditions in our external environment and what is going on inside us,” says Professor Bhalla, a Bachelor’s in Fine Arts from the College of Art, University of Delhi, and MFA from the School of Art, Northern Illinois University, USA. “For centuries, our shifting consciousness about the weather has been shaped by the speculations of scientists and the imaginings of artists, physicists, mathematicians and meteorologists, painters, and poets.” The 28N Parallel, an imaginary line that divides the global North and South, is a silent witness to the impact of climate change, anthropocene, anthropology and art. Starting from the great deserts of Sindh and Rajasthan, the 28N Parallel, cuts through Mount Everest in the subcontinent.

The year-long initiative that began on June 21, 2022, features a collective of photographs, videos and sound footage of locations around the 28N Parallel to map the impact of climate change. The project undertaken by the Professor under the aegis of the World Weather Network, Artangel and Khoj is bringing together a coalition of art organisations, environmentalists and communities in over 30 countries to use a multiplicity of forms to amplify the impact of climate change. The World Weather Network is setting up 30 stations across the world, each operating autonomously, to commission and produce its weather reports locally, in a range of diverse cultural forms and media, and sharing them globally on a new online platform. These weather stations can be an existing physical space like a lighthouse, a library, a boat, a forest, or a factory. “Given the extremes of weather, the public has to be made aware of how each one of us can contribute to keep the planet how it is, and to also resurrect a number of areas — whether they are forest, national parks, or a city’s green cover,” said Prof Bhalla. Throughout the course of the project, various teams will go on expeditions across the country and the world, including Nepal to monitor the weather changes. “I have given the proposal for us to be at the extreme locations in India on the summer and winter solstice. Gokal Pur, next to the Nepal border on the 28 Parallel, is a strategic location for us to map,” mentioned Bhalla while sharing that the project will culminate in June 2023 with an installation in Delhi comprising video, audio footage, and weather reports. India, home to 17.7 percent of the world population is staring at a serious water crisis triggered by unregulated modernisation and anthropogenic exigencies. Over 600 million in the country are already feeling the pressure according to data provided by NITI Aayog. The apex public policy think tank of the Government of India has predicted that the demand for drinking water shall exceed supply by 2030. The Himalayas located in the 28N Parallel, sometimes referred to as the “Third Pole” because of the largest accumulation of ice, after Antarctica and the Arctic, is also facing the heat of climate change. As the circumnavigation of the globe illustrates, one of the coldest places on earth shares the same latitude as many of the warmest, driest spots on our planet. 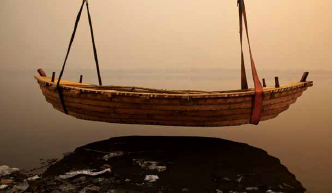 Compared to Saudi Arabia, Libya or southern Texas, which is located along the 28N Parallel, the Himalaya are considerably wetter and retain frozen reservoirs that irrigate South and Southeast Asia. For this reason, they are also called the “water towers of Asia.” One of the reasons they are especially vulnerable to climate change is because of their latitude. If Himalayan glaciers dry up and disappear, as some scientists suggest they might, the subcontinent and Southeast Asia would then begin to look like the sandy wastes of the Sahara. Born in 1964, Bhalla has explored the physical, historical, spiritual, and political significance of water to the urban environment and population of New Delhi through artworks that incorporate sculpture, painting, installation, video, photography, and performance. In Immersions (2008), Bhalla used sand taken directly from the Yamuna-river to make concrete casts of portable water containers. These casts were then placed in water-filled vitrines, drawing a connection between Delhi’s historical source for water and the spiritually absent disposable containers of today. Similarly, in his photographic works of “piaus” (water spigots)—a public source of drinking water—Bhalla examined water as both symbol and source of renewal and re-examination. He is particularly concerned about the relationship between the Yamuna – one of the largest tributaries of Ganga; lakhs of people depend on its water for irrigation, and municipal/domestic use. Venerated in Hindu mythology as the goddess of life, it is also one of the most polluted rivers in the world. With a focus on pollution and scarcity of water, Yamuna Walk traces the artist’s five-day walk around the portion of the river that encircles New Delhi. At times through this journey Bhalla was forced to climb fences and cross concrete overpasses to continue his quest.

These modern obstacles weave their way into the fabric of rural life—connecting and hampering its development as well as continuation. Bhalla’s first significant influence relating to water was his childhood memory of the sound of water drops hitting a steel bucket when he woke up in the morning. The water in that bucket was used for the family’s drinking, cooking and bathing needs and had to last until evening, when the bucket could be refilled. That bucket of water was also Bhalla’s first lesson in water distribution, storage and conservation.