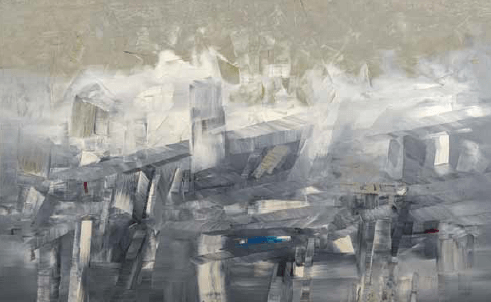 A. Viswam’s art disparages the linear theory of mechanical abstracts and goes beyond conventions of primal change. His abstracts are a free flow of stories, travels and association with rituals.

The abstract art medium first came into the picture at the crossover of the twentieth century. It is an exceptional style of art that breaks away from canons as embodied in real-life figures and identified movement of figures and elements. There are artists and creators who have taken it upon themselves to take the art world by storm with their expansive art movements and techniques in beautiful abstracts. One of those veterans in space is A. Viswam. He is a master who started his journey in a small village in South India. He studied at the Kumbakonam College of Arts, and currently lives in Chennai with his family.

Viswam creates his brilliant works in an art avenue with other gifted artists in Padappai, a town near Chennai. His knowledge of diverse traditional techniques with mythological and pastoral paintings ruled the canvases in his hometown and the places he painted as a young adult. The artist once worked with the Weavers Service Centre along with other talented artists and sculptors from different parts of India. He was also a student of the acclaimed and respected Tamil Nadu artist S. Dhanapal (1919-2000). Viswam was accustomed to an imperial array of creating art from figurative elements to temples, architectural abundance and ranges, institutions with exquisite energy and a traditional selection of examples from art teachers. His heart, however, coaxed him to venture into his own world of abstract art and performances. They dance together and play with paint and knife strokes as they reciprocate, with the canvas. “Abstract is a dance of colours, dots into lines and linear moves into stunning moods, subjective and personal,” the artist states. Over his experience spanning five decades in the world of art and creativity, he has won several awards at art academies, including the state award (1992) followed by a national award (1995) and has international honours to his credit. Displays of his mesmerising works have celebrated a variety of exhibitions in and outside India. Inimitable art, an assortment of shades and creations stimulate a continuous, rare, sequined journey of his paintings. Every element of nature and life motivates him to create his poignant canvases. His abstract form expresses the thunder and tamed forces of nature he often describes as moods of our Earth. “Abstract art never ends,” he says, “It just continues to swap souls and linger.” A. Viswam’s art depicts nature in abstract forms: skyscapes, landscapes, wind and commotion, wonderful waves and vicious beauty. His paintings, concurrently, evoke a sense of calm as one drifts through thoughts. The artist’s actions resemble those elements as he moves, applying colours directly to the canvas and sweeping diagonal, vertical, and horizontal strokes to create his vision in prominence. The tones of colour produced on his canvases are dominated by one shade that is followed by minimal patterns of the stark contrast in hues and vibrancy. In the spread of abstracts as art, historical movements are considered to be the foundation of the Avant-Garde Modern idea in the west and represent a rejection or a dissolution of the traditionally accepted sense-data of the visible world.

Geometric abstraction often favoured the impersonal, technological and mathematical over the expressive qualities of the most prior art. Simultaneously in Europe, abstraction took on a metaphysical or religious concern. The movement cited colour and form as the inspiration for a more meditative and humanist bent. Nevertheless, Viswam’s art disparages the linear theory of mechanical abstracts and goes beyond conventions of primal change. His abstracts are a free flow of stories, travels and association with rituals. Art as expression, feeling and beauteous style is also significant in the investment class with the days of digitalisation and asset creation as well as encourages the growth of abstracts in art. It is the most expensive art form to purchase and display as a value addition to the aesthetics of places, asset creation, subjective stance, inter border communication, modern art capabilities, and speculation as part of the future of the art universe. As a devotee of abstracts, Viswam beautifully supports the “cherished art form” despite his education in traditional techniques. He says, “My journey started with a semi-abstract. Figures often move from one place to another and in order to create that, an element needs to flow. I have been consistent with my work, leaping from an amateur painter to a known creator in the art world. I can never plan in order to create. Painting is like breathing: unplanned and unconventional.” Viswam possesses a very energetic and outgoing persona, which is aptly reflected in his attention seeking vivacious brushstrokes. “My paintings never finish; they only change forms on a new canvas. It is upon the admirers of art to understand my perception. They understand the language of art and I believe we have a lot of artistic potential in India,” the artist says. “Among other mediums and techniques, light is severely important for me, though I keep alternating as per my conversations with the paint and platform. My canvases invite me to make a painting. The same forms are never repeated. It is not even possible. I often think of responding to elements of society. Life and nature teach me a lot about my expressions in paintings. It is like a domino effect of splashes of hues,” he adds. Viswam remains in rendezvous with his art and frequently leaves one desiring to watch him paint and carry his series of coloured canvases in tender memory.

The artist is represented by Easel Stories Art Gallery, Noida