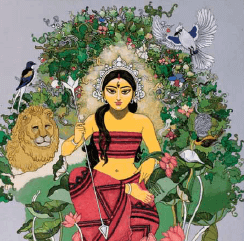 In depicting the beauty of the feminine, I have a fondness for portraying ornaments, good clothing, hair styles and motifs on beautiful women. Goddess Durga was the first woman I liked

Mousumi Pal Majumdar, a Kolkata-based artist, has been depicting women and goddesses in a form which is rather heavenly. Born on January 1, 1977, Mousumi was deeply interested in drawing since she was three years old. This interest culminated in seeking admission to Indian College of Art and Draftsmanship, Kolkata, where she completed her BVA in 2002. Mousumi’s artworks focus on women, characters from mythology, epics and fairy tales. But it is the minute details like glittering ornaments, embellished clothing and gorgeous hair that make her paintings seem like they have drifted from a world of fantasy. In an interview with Art Soul Life Magazine, the professional artist reveals what inspires her in creating her artwork.

When did your interest in art take root?

I was three plus years of age when I started drawing. I used to draw on the floor, wall, slate, furniture, and later on the exam question papers too! The media included chalk, pencil, sometimes a broomstick on the courtyard clay surface and water on the dry floor. I also attended classes at a local art school. At the age of six, we moved from North Kolkata to South 24 Parganas, the outskirts of Kolkata in 1982. At the time the place had jungle areas and we got to watch nature. In this new area of residence, I took an interest in books, trees, our courtyard at home, the big fields, chirping birds and the natural surroundings. I also got interested in books and children’s magazines for illustrations. I could relate pictures with the stories, and would also try to draw something similar. Sometimes after reading a story, I would depict some of my favourite situations through drawings. My grandmother’s paintings had a big impact on me. A self-taught artist, she made paintings in watercolours and pencils. Her paintings were a source of inspiration in my childhood. My mother was also good at drawing and embroidery.

When and how did you formally train to be an artist? How did your family react?

I never planned to be an artist. After I completed my graduation, I wanted to pursue interior designing or commercial art. I tried to seek admission in some of the renowned institutions but failed to get admitted. Either the admission to the sessions were closed or I could not pass the admission test as I was totally uninformed about the process of admission. It was heart-breaking for me. Then a family friend advised me to look out for an art college. And I finally got admitted in the Indian College of Art and Draftsman-ship in Dumdum in commercial art stream in 1997. My parents were liberal and gave me full freedom to make my decisions. So, when I decided to get admitted to art college, they were really happy and supportive. I did my bachelors in visual art. In the second year of the programme, I realised that instead of commercial art I was more interested in painting.

Who or what inspired you to make what you have been drawing over the years?

My paintings are a graphical representation of my subconscious mind. They are a reflection of my childhood, teenage and youth. I like historical stories. I have read many historical stories of renowned writers. Sharadindu Bandyopadhyay was my favourite writer. The creator of detective Byomkesh Bakshi, he is also famous for great historical novels like Tungabhadra Tire, Tumi Sandhyar Megh as also short stories. These types of stories had an impact on my paintings.

As a child I was fascinated by the characters of the stories which I used to listen to from my grandmother, father and uncle. Subsequently, I started reading story books which I chose by their genre namely, fairy tales, adventure, mythology, and the epics so I could get many woman characters and would usually depict these. In depicting the beauty of the feminine I have a fondness for portraying ornaments, good clothing, hair styles and motifs on beautiful ladies. Goddess Durga was the first woman I liked. I used to watch the idol of the goddess amazed at her gorgeous looks. She seems the embodiment of intense beauty, adorned with ornaments and weapons, with long hair and having the utmost powerful presence. She is considered the creator of the universe and the destroyer of asuras. As a child I used to visit pandals with my father during Durga and Kali puja. After returning home I would make drawings of the idols depicting their ornaments, hair styles, costumes and expressions. My first painting of a woman thus was Devi Durga. And the obsession remains. My paintings depict human psychology, complexity, relationships and emotions, and have a historical flavour. The woman manifests all of this. She is the best medium to portray psychological phenomena. My paintings contain various textures. I love to make textures. Weaving is also a favourite with me. My canvas is the medium of weaving. I weave with colours. I weave stories of human relationships. I also make paintings of Hindu gods and goddesses such as Ganesha, and of course Durga.

Mostly focus on the beauty of the woman, and the woman in relationship with nature. The woman as a lover, and sometimes as the seductress. My women are romantic, beautiful, waiting for messages or letters from their lover. I portray them with good makeup and ornaments and clothing of my own design. From childhood I used to design outfits for my sister and me.My paintings depict my subconscious memories. My sorrow, joy, affection, and all kinds of emotions are depicted. Women can heighten a war or spread peace. So my woman is shown, for instance, as the cause of war. In fact, we find women in many epics and stories as the agent of war. It may sometimes be for her beauty, or sexual attraction or out of revenge. We find her as Sita in Ramayana, Draupadi and Sikhandi in Mahabharata, and as Padmini of Chittor, It can be said of a woman that she is many in one. The woman is the carrier of genes. She is the symbol of fertility. She is the symbol of infinity. She epitomises power. She is complete.

What are your preferred/ favourite media?

At present due to my style of painting and the subjects that I portray I prefer acrylics. Earlier oils were my favourite, besides of course other media like pastels, watercolours and ink.

Besides painting do you engage in any other art or craft?

Sewing and tailoring are my hobbies. And I like making junk jewellery.

What kind of artistic activity have the current pandemic times allowed you to engage in?

These pandemic times have adversely impacted artists. The art market has taken a beating. We are not very hopeful of having exhibitions in offline mode. Of course, some galleries and artists are trying the online mode, and are partly successful. I too am trying the online platform.

You and your husband are both artists. How does it influence impact your life and work?

As my husband, Basudeb, and I belong to the same profession, our frequencies match, of course. He is supportive. What is most satisfying is that I am continuing with painting even after marriage, managing the home and family alongside. 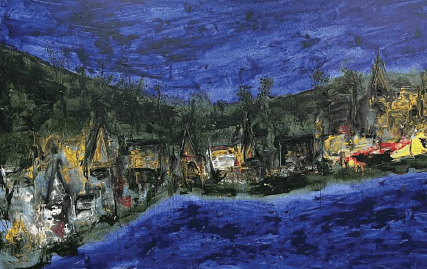