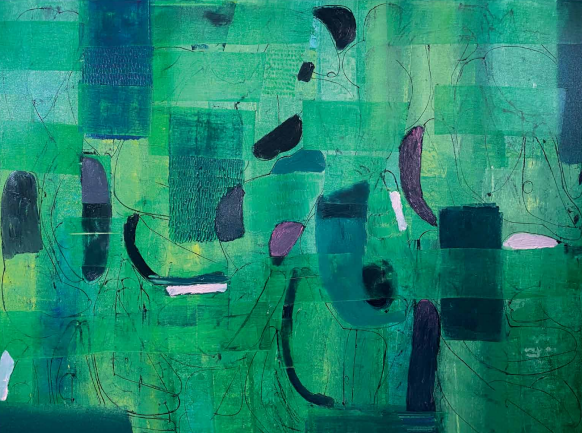 He gained early national and international recognition and appreciation; his work deals in a liberal, almost cheerful way with transcendental bearings, along with an intensive abstraction. Abandon and gaiety mark Hem Raj’s work style, which is reminiscent of Sufism. Colours are kept to the bare minimum, and different shades of the same colour have been used to the maximum effort.
TEXT: TEAM ART SOUL LIFE

A familiar name in Delhi’s art world, renowned artist Hem Raj who has experimented with a variety of mediums.has produced a remarkable body of oil paintings over the years. Top Indian art galleries have been dealing in his works and their assessment is that he is one of the most saleable Indian painters in the abstract vein. A graduate of Delhi College of Art, the 53-year-old artist, however, does not like to label his form with any fixed epithet because he thinks it leads to a sort of brink of closure. He chooses colour and its tone carefully and with intention; most of the time the major areas of his canvases are monotones. Hem Raj says to him all art is abstract irrespective of its general categories such as figurative, surrealistic or realistic. “Of course, my sense of ‘abstract’ art is a bit different from what is generally considered as abstract art. I use the term abstract in terms of essence and not at all mean what can generally be described as nonfigurative,” he explains. His work style is reminiscent of Sufism, the same abandon and gaiety in reference to the divine who is the lover and the teacher, the giver and the keeper. Colours are kept to the bare minimum, subdued shades – monochromatic colours – where different shades of the same colour have been used to the maximum effort. No stark colours for Hem Raj, which is where he perhaps differs from the tribal artists who have a penchant for using bright shades. Indigo blues, olive greens, dusty pinks, murky browns, rusty oranges, pale yellows – he is indeed different from them.” My art evokes a different feeling because it is close to nature. It tends to provide a view with the intention of evoking a feeling which one gets when one roams about in an inviting landscape. I can therefore say that I provide my audience a scape that is engaging enough to compel them to peep and survey, to implore and explore and then return to a stake of enlightened equilibrium,” says the artist. He explores the landscape feeling with one colour and its countless tones. Each of his paintings has its own rivers, hills, waterfalls, smell and vegetation and its own independent entity. In his paintings, melody, rhyme, rhythm and soul coalesce into a single whole. His artistic technique is as innovative and interesting as his works are. For instance, he adds layer and layer of paint while building up the essence of the work. The light and effervescent images that confront us are just like a piece of music. They have a beginning, a middle and an end and this process may be repeated over and over again as Hemraj takes off almost more paint than he applies. His is a technique of minimalism. He keeps reducing the colours, the lines and the forms until we are left with the bare essence, just enough to consume the work with the meditations and genius of the artist. During the recent years, Hem Raj has somewhat moved away from the stern, highly defined construction of his paintings. They are very colourful and gained more freedom in configuration. Very large, often radiating monochrome spaces are arranged in daring combination.

He says nobody in his family could think of sending him to an art college. Art – painting, music or dance – was not considered as a profession. But when he expressed his desire to enter College of Art (Delhi), instant support came from his father. Says the artist, “Because he alone knew how deeply involved I was with painting and could make a professional career out of it. However, the saving grace was, that nobody opposed such a course for myself. That open and silent support for my desire has been my strength all along.” Though Hem Raj remembers his first year at the College as “very unsatisfactory”, he went on to win the award for best student for both BFA and MFA courses. “In the College, some of the teachers appreciated my abstract renderings and some were indifferent. But, I respected all of them, unreservedly, though liking those who were encouraging in their behaviour more than others,” he recounts. “Over all, things went in my favour all along. This was really a big gain. I am still very thankful to the late Sidheshwar Dayal, who ran a gallery at Mandi House, New Delhi, for hosting my first solo show while I was still a student at College of Art. And I am still deeply thankful to the then College Principal, Sh. O.P. Sharma, who suggested my name to Mr. Dayal.” A National Award winner in 2000, he counts V Gaitonde and K. S Kulkarni among those who inspire him.