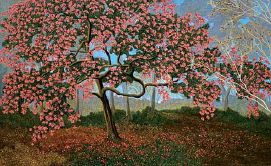 Artist Shuvankar Maitra’s work is not just about immortalizing a scenery or bringing his vision to form. He captures seasons, the transitions in nature, and the resilience of trees by artfully playing with elements of light and shadow. Author and poet Hermann Hesse once rightly noted, “Trees are sanctuaries. Whoever knows how to speak to them, whoever knows how to listen to them, can learn the truth.” Trees are humanity’s placid reminder and sturdy companion. They accurately represent the qualities that most people aspire to embody; they are both brave and beautiful. It is in these sanctuaries that artist Shuvankar Maitra, a BFA from the Government College of Art & Craft, Kolkata, found his inspiration and learned the truth. He expounds, “Trees form the major source of my inspiration combined with the various seasons. All trees are symbols of stability.” This inspiration is evident in his acrylic paintings of nature.

The paintings, with their coherent and meticulous portrayals of trees, captivate the viewer. They bear the simplistic flair of the environment combined with its intricate complexities. He achieves this through the microscopic circles made using rotary pens and the layers of colours that he amplifies with light. Pink remains the colour of the most prominent leaves, displaying a poised and poetic interpretation of the trees’ temperament. The leaves stand out as pleasant and tranquil. The trees’ reflection in the still, sparkling water is unperturbed to convey the characteristic the artist admires most: stability.

Turn your attention to the expert strokes of light and shadow, and one can immediately infer the season and location of the artwork. The layers of colour are unmissable to the naked eye and lend a sense of completeness to the tableau. The work emits a glow that cannot be ignored or forgotten. The quiet disposition with which the painting makes a statement is telling of the hand that painted it. Not often does one get the chance to experience a work of art that reaches out and pulls them in to be a part of the larger picture. That is the power of Maitra’s artwork.

Maitra is among the many who are filled with childlike wonder when they approach nature. For him, it is the trees that leave him enraptured. True to his profession, he stood as no exception when it came to recognising, replicating, and recreating the beauty of what was present. In doing so, he displayed exceptional style and technique that encapsulates the virtues of nature in all its glory. Maitra is no novice. He is well-versed with the fact that, like life, art’s true meaning has multiple layers. His signature technique evokes this sentiment by creating art using layers of paint that start with tiny circles. At the outset, he captures the scenery through his sketch, which serves as the foundation for his painting. His arsenal — a fine rotary pen — gives form to the trees on paper in the form of minute circles.

Once satisfied with the blueprint, Maitra, armed with his brush, finally breathes life into his sketch using a well-thought-out, delicate melange of colours. Layering them using sparing brush strokes, he strives to create a work of art that welcomes the beholder into his masterpiece while keeping them at arm’s length to not tamper with his imagination. His paintings are not simply about immortalising a scenery or bringing his vision to form; no, it’s much more. He captures seasons, the transitions in nature, and the resilience of trees by artfully playing with elements of light and shadow. Be it blossoming in spring or standing unwhitened by the winter chill, bearing fruit in the summer, or renewing in the autumn, the trees in Maitra’s paintings capture these evolutions while also celebrating them.

All of us have grown up with nature all around us, but only a few of us have understood it. Even fewer have understood it enough to accurately reconstruct it for the world’s wide-eyed admiration of something otherwise so seemingly mundane. Maitra is among those specialised few. Of his ability to reconstruct nature and its unlimited possibilities, he notes, “There is more to trees than pretty flowers, delicious fruits, and relaxing shade. That is a very powerful message, which I try to express through my paintings.” And he expresses that convincingly and with ease. This skill is testimony to Maitra’s exceptional comprehension of light and colour. It comes as no surprise once you enter the artist’s realm of understanding art which is expansive, to say the least. Revealing a mere iota of the magician’s trick, he says, “I use dark and light shades to bring out the depths of the leaves and to reflect the changing atmospheric conditions.”

Art celebrates the ever-changing world; it celebrates humanity, nature, and the relationships they share. Maitra’s works are a testimony to the timelessness of these relationships. It places the trees in the position of a teacher or an edifier, and rightfully so. He believes that trees are compelling representations of sense and stability that encourages him to depict them in such light. By looking at the painting, one can deduce that the artist is, indeed, incredibly gifted. But he is also driven and determined to express himself. It’s the sign of a one-of-a-kind virtuoso. The use of vibrant colours, light, and fine details will leave you feeling inspired; it will make you appreciate this artist’s hard work. After all, art is hours and hours of patience, skill, and creativity. It involves layers — eight to twelve, to be exact — of colours and an understanding of depth like no other. ore over his work, and one will be hard-pressed to find any flaws when it comes to accurately capturing distance, depth, and shades. One glance reveals the mastery he has over style, technique, and emotion. When it comes to brushing strokes, he is reserved with his approach. Paring it back to let the million tiny circles created by the rotary pen and the dabs of acrylic do their work. He uses light and shadow to punctuate his setting and inform his viewers of the time and place. It is his romance with nature and art that leads us seamlessly into his poignant world.

– The artist is represented by Easel Stories Art Gallery, Noida