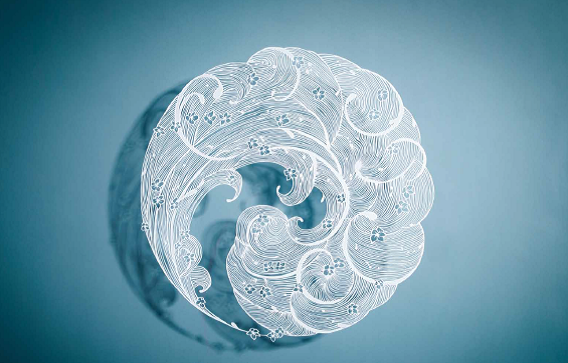 “Having perfected her paper-cutting technique over a period spanning a few years, she is now widely known for her intricately detailed designs, which capture her skillful approach, steady hand, and unwavering patience.”

When you think of Japanese paper crafts, origami is likely the first art form to come to mind. If you’re familiar with this age-old practice, you know that a work of origami art is created by manipulating a single sheet of paper with nothing but a series of strategic folds. While this is the most well-known approach to the ancient art form, there are also adaptations. Kirigami, a variation of origami, offers a bit more creative freedom by allowing artists to cut, clip, and snip their paper creations. “Kirigami is the Japanese name for the art of cutting paper,” informs Delhibased Vanshika Rathi. “Originating in China, this art form has evolved uniquely all over the world to adapt to different cultural styles.” Rathi says it’s a traditional art often depicting folk tales and religious stories from across the world. “One traditional distinction most styles share in common is that the designs are cut from a single sheet of paper. Usually thin tissue-like papers and washi papers are used, which are cut with a small pair of scissors, although I prefer to use an x-acto knife,” she says.

Ever since she was a child, art was always just a hobby for her. “I’d spend most of my time at school doodling on the edges of my books. But I was a good student and it never really occurred to me to pursue art seriously,” she says, adding, “I studied economics at the University of Warwick, followed by a masters’ at the London School of Economics. Whilst at university, I came across some beautiful paper cuttings by Danish artist Karen Bit Vejle. I had never seen anything like it before, and I was so taken with the idea that I immediately went and bought myself some paper and tools, and I haven’t stopped doing it since.” Explaining the process, Rathi says she draws her work on a single, large sheet of paper and then carves it with an x-acto knife. “The key is to make sure while drawing that every single element is connected. Cutting the paper is a therapeutic process where I simply follow the drawing. Once that’s done, I flip it over so that the pencil lines do not show, so I always have to remember to draw a mirror image of whatever I have in mind,” she says. A self-taught artist, Rathi says ever since she started practicing kirigami, she has learnt mostly through trial and error. “While I didn’t learn this art from anyone specifically, I have taken a lot of advice from other artists, tried out several types of papers and knives, and over the years created a technique that is entirely my own. There are several paper artists around

the world and each time I contact anyone asking for advice, they are always ready to help and each time I find that I have learned something new,” she says. After completing her education, she had a corporate job for a while. During this time, she would get back home every evening and spend several hours working on small pieces for herself, exploring different tools, techniques and topics, and this was always the best part of her day.

“I would often post pictures of my work on Instagram and many were intrigued by it. It took about two years – and several inquiries from people who wanted to buy my works – for me to realise that this was worth quitting my job for, and I began doing this full time in 2017,” she says. For Rathi, her art started out as an extension of her doodles and it is inspired by everyday objects, travel and architecture. She loves adding whimsical, fairytale-like, and unexpected floral elements to her work. “I especially like to approach it with a bit of light-heartedness and humour. Paper cutting is a slow art, and a large piece typically takes two to three months to make,” she reveals. Rathi says paper art is typically seen as a traditional craft. “However, there are some incredible paper artists in India and people are slowly warming up to the idea of seeing paper as a contemporary art form. Through my works, I often reimagine everyday things, bringing beauty and a touch of whimsy into mundane everyday life,” she adds. Currently she’s working on a series that explores a physical depiction of the movement of time. “This is my most abstract theme yet so I’m excited to see how it turns out,” she says.